The 2020 election is just around the corner, which means we are hearing more details about the platforms the candidates are campaigning on, everything from international relations to immigration to—of course—the economy.

While it’s normal to hear about potential tax changes, jobs, and trade policies at this point in an election year, the impact of COVID-19 on our economy has made politicians’ promises to decrease unemployment, cut taxes, and increase GDP even more attractive. But an important question remains: How much power does the President truly have over the economy? Will their plans really make a difference?

Well, the short answer is: It depends. Presidents are usually awarded praise or denounced as failures depending on the state of the economy during their tenure in the Oval Office. But the economy is a complex, many-faceted system, and the President has more influence over some aspects of the economy than others.

While the stock market and the economy are not the same thing, markets can reflect certain elements of the state of the economy. In reality, the President doesn’t truly have as much control over the stock market as many think (although the choices they make can certainly have short-term effects on investor confidence and market performance, particularly on certain securities and sectors).

Common powers the President does have include (but are not limited to):

However, the stock market performance at the beginning or end of a President’s term in office isn’t necessarily indicative of their choices. It may have more to do with the naturally-occurring cyclical nature of market performance, socio-political changes, or a myriad of other factors which can impact the market’s performance. Research tells us that there is no trend driving the market returns of a particular political party, and the President probably shouldn’t receive much credit or blame for stock market performance during their term, as evidenced below in the hypothetical growth of $1 invested in the S&P 500 since January 1926 until December 2019. 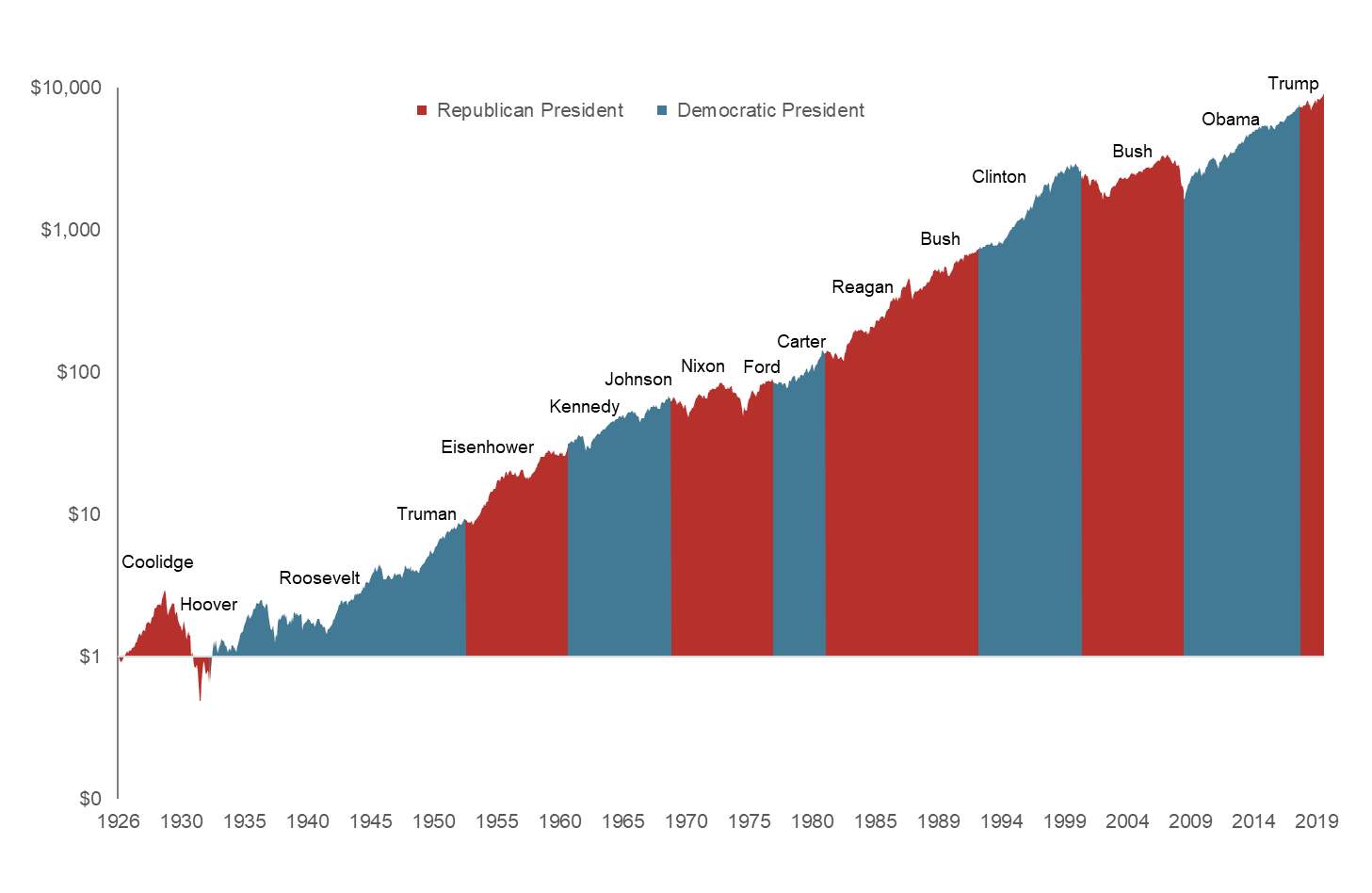 As you can see from the chart above, the party that controlled the Oval Office didn’t have as much impact on the markets as events that occurred like the Great Depression, World War II, the tech boom in the late 1990s followed by the crash in 2001, and the Great Recession in 2008 followed by the recovery. Similarly, the party that controls Congress also doesn’t show any pattern of market performance. 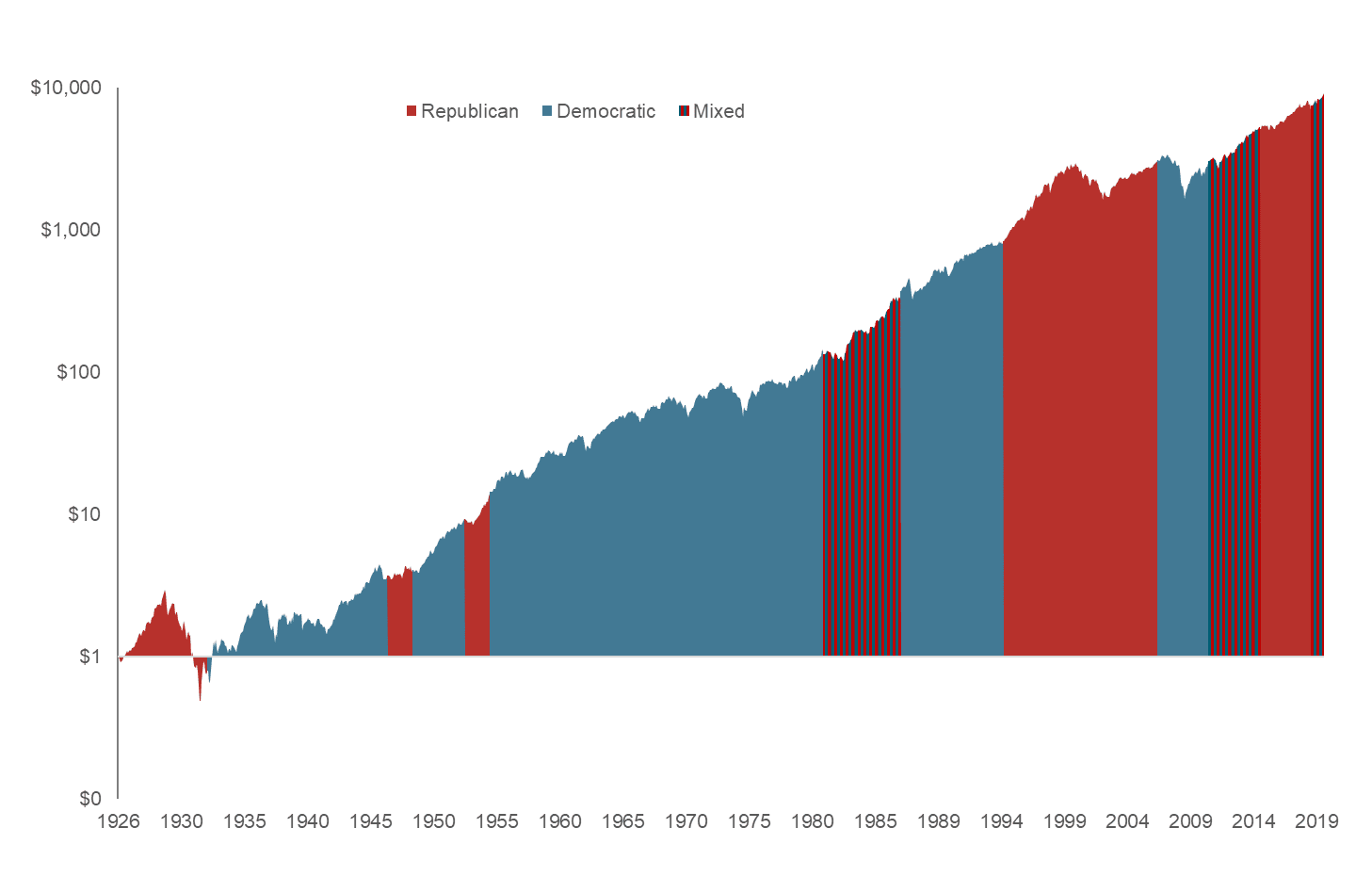 Upon entering office, the President steers fiscal and regulatory policy. The tax and regulatory policies they propose, if passed by Congress, have major effects not only on how citizens are taxed but also on how businesses are taxed and regulated. For example, President Trump’s Tax Cuts and Jobs Act of 2017 lowered income tax rates for most people, increasing spending power and boosting savings and investments. It also lowered the corporate tax rate from 35% to 21% in an attempt to promote job creation and business reinvestment.

Additionally, the President oversees regulatory policy, which aims to strike a balance between efficiency and equity. Regulatory policies limit what companies can do in the marketplace in an effort to protect vulnerable consumers, and these policies apply to many industries, such as the finance, manufacturing, and energy sectors. Typically, deregulation is believed to be better for businesses (albeit occasionally at the cost of consumer protections), as less regulation frees up resources that can be used for more productive goals, thus boosting the economy. However, deregulation in certain industries – such as health insurance, which has unfolded since the 1980s – can prove to be problematic over time depending on who you ask.

The Federal Reserve (more commonly known as the Fed) is an independent agency from the federal government that provides the nation with financial stability and flexibility. In addition to supervising banks and other financial institutions, the Federal Reserve oversees monetary policy, which can involve governing interest rates (among other things) to achieve macroeconomic policy objectives, such as hitting certain targets for unemployment levels and inflation rates.

The President is also responsible for making economic decisions in response to external shocks and crises. The President’s response to the current COVID-19 crisis provides an illustrative example. The global pandemic has jolted national economies around the world and affected American citizens across all income levels. The President is responsible for signing stimulus packages into law, which he did on March 27 with the CARES Act, although it is up to Congress to draft laws such as the CARES Act. This stimulus package offered economic assistance to American individuals, families, and businesses. Other external shocks that might require the President to respond with economic policy include oil price wars, natural disasters, and warfare.

Ultimately, any President’s tangible influence over the economy is uncertain and difficult to prove. The economy is driven by many complex and interconnected factors, of which politics is only one small component. Additionally, policies implemented earlier in presidential terms can have long-term, far-reaching effects that current economists may not realize in short-term analyses.

Whatever questions you might have, we can help you answer them. At Strategic Financial Planning, Inc., we are serious about our job of stewarding our clients’ finances well, and part of that stewardship involves continually educating ourselves and you about relevant economic changes. If you’d like to feel more secure about your financial plan, consider partnering with a financial advisor who takes your full financial situation into account, current economic environment included. To get started, call (972) 403-1234 or contact us online to set up a complimentary get-acquainted meeting so we can see if we are a good fit!

Bryan Lee is founder and President of Strategic Financial Planning, Inc., an independent, fee-only financial advisory firm. With over 27 years of industry experience, Bryan uses a unique client-first financial life planning approach and process to help his clients get the most out of life. Bryan earned his Bachelor of Business Administration in finance and MBA in international finance from the University of North Texas and is a Certified Financial Planner (CFP®) practitioner. Bryan is actively involved in his community and industry and has served on the boards of several associations and charities, including serving as President and Chairman of the Dallas/Fort Worth Chapter of the Financial Planning Association, the National Association of Personal Financial Advisors, the CITY House Board of Directors President and Chairman, Editorial Review Board of the Journal of Financial Planning, Family Services of Plano, as well as a Junior Achievement Volunteer Teacher. Bryan has been featured in local and national magazines, newspapers, and journals, including The Wall Street Journal, Investors Business Daily, CNNfn, USA Today, SmartMoney, Kiplinger’s Personal Finance, Financial Planning Magazine, The Dallas Morning News, Dow Jones Newswires, and has been recognized as a Five Star Wealth Manager and one of Dallas’s Best Financial Planners in D Magazine every year since its inception. To learn more about Bryan, connect with him on LinkedIn.